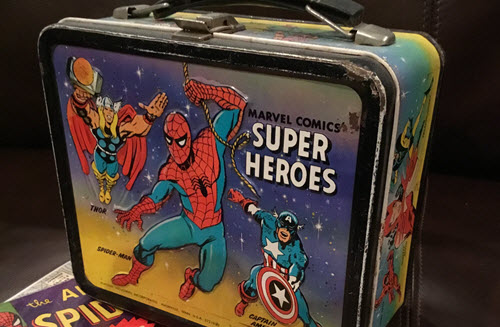 Many kids bring food to school in a special lunch box. A lunch box will often have separate compartments within, to prevent different foods from touching each other. That way, it is not necessary to bring a multiple of containers to school.

To keep the lunchbox from accidentally opening, it is good to select a box with a safe closing mechanism, such as a belt or one or more clasps.

Some lunchboxes are intended for carrying within a bag, while others have their own handle to make them easier to carry as a handbag.

Lunchboxes are available in various materials.

Among schoolchildren, lunchboxes made from plastic or metal are common, since they less likely to break than glass lunchboxes.

(Glass lunchboxes are more common among adults who have the option of microwaving their lunch before eating it.)

In 2002, the U.S. Center for Environmental Health revealed that many vinyl lunchboxes sold in the United States contained high levels of lead. As a result, many lunchboxes were pulled from the shelves. Today, it is possible to buy lunchboxes where the manufacturer has tested the material for lead and labeled the box as lead-free. Independently tested and verified lunchboxes are difficult to obtain. Because of this, coupled with more general concerns about food being stored in plastic, some parents now opt for school lunchboxes that have an inner container made of glass which keeps the food from ever being in contact with the outside casing.

Some lunchboxes are well insulated to help keep warm food warm or keep chilled food from reaching room temperature before its time to eat. 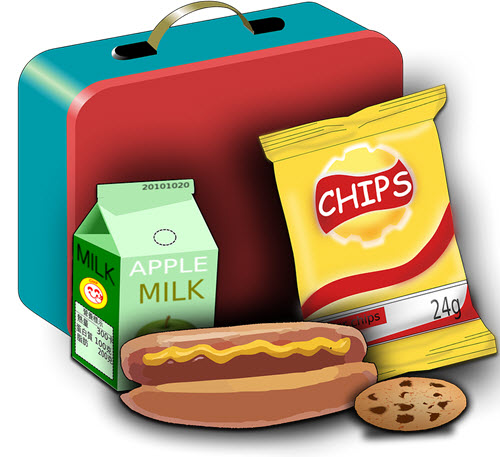 In some schools, children need to bring something to drink as well as eat. Therefore, lunch kits are available that consists of a lunchbox + a refillable bottle or thermos.

Bento is a packed single-portion meal in Japanese cuisine, and many Japanese school children bring bento to school every day. A traditional bento is carried in a special box and consists of rice or noodles, fish or meat, and pickled and cooked vegetables. The bento box is customarily wrapped in a furoshiki, a type of Japanese wrapping cloth which acts as both bag and table mat.

In Japan, a wide range of bento boxes are available in the trade, from cheap mass-produced plastic ones to more expensive handcrafted lacquerware boxes. In Japan, wooden lacquered boxes have been used for bento since at least the 16th century. In the early 20th century, the metal bento box became a status symbol. After World War II, the practice of bringing bento to school declined but was revived again in the 1980s. Now, the expensive wood and metal bento boxes faced competition from more affordable ones made from plastic.

Oekakiben means picture bento. It is a style of bento where the food is decorated to look like people, animals, buildings, flowers, etc.

Kyaraben, also spelled charaben, is another example of an elaborately arranged bento. The term is a shortening of kyarakutā bentō (“character bento”), and the food in the bento box can, for instance, be positioned and decorated to resemble popular characters from manga, anime or video games.

Dosirak is the South Korean term for a packed meal, and box in which the dosirak is carried is known as dosirak-tong or just dosirak. A dosirak-tong is usually a plastic or thermo-steel container, with or without compartments or tiers. The typical dosirak meal is cooked rice with several side dishes (bachan).

Dosirak made for children are often packed in a tiered dosirak-tong where the cooked rice is separated from the bachan. If guk (soup) is included, it is usually placed in an insulated tier.

Just as in Japan, more expensive dosirak-tong are available for those who are willing and able to pay for them, e.g. dosirak-tong made from wood, lacquerwork, bamboo, or ceramics.

Yennal-dosirak means “old-time dosirak” and is a classic dish consisting of cooked rice, egg-washed and pan-fried sausages, fried eggs, stir-fried kimchi, and shredded gim. Yennal-dosirak is packed in a rectangular metal dosirak-tong. Right before eating, the dosirak-tong is shaken to mix the ingredients with each other.

Lunchboxes in the United States

Throughout U.S. history, midday food has been carried in various ways by children and adults, from simply wrapping some food in a handkerchief to the elaborate wooden food boxes created for wealthy buyers. Some of the surviving lunch containers from the 1800s are woven baskets with handles. The 19th century is also when tinplate lunchboxes become common, sometimes in the form of reused biscuit containers. In the second half of the century, more elaborate lunchbox designs start to appear, with various inventors trying to patent their creations. Vacuum flasks adapted for lunch box use were launched around the turn of the 19th century.

In North America, Ontario miner Leo May helped popularize the use of aluminum lunchboxes in the 1950s. After accidentally crushing his tin lunch box, he got the inspiration for a more sturdy lunchbox made from aluminum.

Nowadays, characters from movies, books, TV-series, computer games, and more are ubiquitous on lunchboxes – especially on those intended for school children. In the United States, this trend started in the 1950s. Aladdin Industries made a children’s lunch kit based on the television show Hopalong Cassidy in 1950 and 600,000 units were bought in its first year alone.

In 1953, Geuder, Paeschke, and Frey obtained a license and produced the first Mickey Mouse lunchbox; a lithographed oval tin box with a pull-out tray inside and a handle on the outside.

PVC (vinyl) lunchboxes debuted in the United States in 1959 and became a big hit during the 1960s.