A marker pen, also known as a felt-tipped pen, is a pen with its own ink-source and a tip made from felt or some other porous, pressed fibers. When the pen is not in use, a cap is placed on the tip to prevent drying.

Marker pens come in many different versions, such as dry-erase, wet-erase, and permanent waterproof.

The reservoir is where the ink is kept within the pen. Today, most marker pens have polyester reservoirs.

The tip consists of a porous material that will absorb ink from the reservoir and allow the user to write with the pen without any ink dripping from the pen.

Most modern marker pens have a tip made from either highly compressed synthetic fibers or porous ceramics.

Today, marker pens are usually filled with dye dissolved in alcohol. There is usually also some water in the liquid, but rarely more than 10%.

Until the early 1990s, the strong-smelling xylol and toluene were common solvents in all kinds of marker pens. Today, toluol and xylol are only common solvents for permanent markers (indelible ink markers). Both xylol and toluene can be harmful to a person’s health. If you are buying marker pens for children, it is advisable to avoid pens filled with xylol or toluene, especially if the child will be using the pens without constant adult supervision.

In addition to dye and solvents, the ink found in a marker pen can contain various additives. Here are a few examples of fairly commonly used ones: 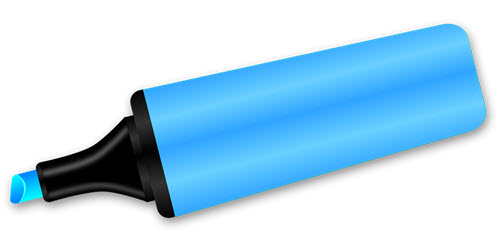 Highlighters are used to highlight existing writing. The ink is very transparent since the idea is to still be able to clearly read the pre-existing text after it has been highlighted. Neon yellow, neon green, and bright pink are all examples of popular colors for marker pens of this type.

Permanent markers leave marks that are not intended to be removed, although most of them can be removed if you use the correct solvent, e.g. alcohol for an alcohol-based ink, and so on. Vigorous scrubbing can also work but might hurt the underlying surface.

It is possible to buy permanent markers that can be used on tricky surfaces such as glass, plastic, and metal where most other ink pens would be useless.

Whiteboard markers, also known as dry-erase markers, are intended for use on whiteboards / dry-erase boards. Whiteboards have a glossy surface that makes it easy to remove the writing without having to use water or any other solvent.

In many schools, whiteboards have replaced the traditional blackboards.

Wet-erase markers are typically used on non-porous surfaces such as whiteboards, signboards and the plastic sheets utilized for overhead projectors. The text will be fairly resilient to dry-erasing, but can easily be removed with a damp or wet cloth.

In schools, wet-erase markers are often used to draw templates on whiteboards. Whiteboard markers (which are dry-erase) can then be used to fill out the template, and when it is time to remove that text a dry-eraser can be used without accidentally removing the template as well.

Security markers are filled with pigments that aren’t visible to the naked human eye unless the writing is lit up by ultraviolet light. These markers are used to mark items that might be stolen. Since the markings are invisible in normal light, the markings don’t make the object ugly. Also, a thief working under normal light conditions will not notice the markings. If the stolen object is recovered, e.g. in a police search, an ultraviolet light is used to make the markings visible. The markings make it easier for the authorities to identify the item and connect it with its rightful owner. The markings can also help prove that the object is the same as the one reported stolen and not another item from the same manufacturer.

In some schools, security markers are employed by science teachers to teach the students about ultraviolet light, fluorescence, etc. They can also be used by pupils who wish to mark their belongings in a non-obvious way.