The most common type of pencil for pupils consists of a narrow, solid graphite core protected by a (permanently bonded) hexagonal wood casing, although cylindrical casings are a popular alternative to the hexagonal ones. A downside with cylindrical casings is that they are more likely to roll off a pupil’s desk.

The letters and other markings produced by a standard graphite pencil will vary from pale gray to very dark gray, depending on factors such as pressure applied, amount of graphite deposited in an area, and the HB value of the pencil. The graphite is usually not pure but mixed with a clay binder.

In school, pencils are used for both writing and drawing, and some schools require the students to bring a set of colored pencils in addition to the standard gray ones.

One of the reasons why pencils are often preferred over pens in school is that pencil marks can be easily erased with a standard eraser. Please note that when it comes to colored pencils, many of them have waxy core binders and the pencil marks will smear the paper rather than being erased when an eraser is applied.

The most common type of pencil used by school pupils is the one with a core made from graphite and clay. The graphite provides the pigment and the clay helps bind the core together. The darkness of graphite pencils varies from pale gray to very dark gray.

Pencils with a charcoal core provide a fuller black than graphite pencils and are popular for sketching. Compared to graphite, the charcoal smudges easily, which can be a desirable or undesirable quality depending on the circumstances. Also, charcoal is more abrasive. 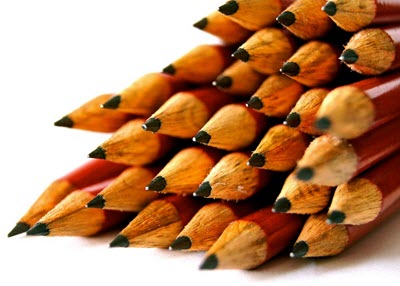 Pencils marketed as carbon pencils usually have a core consisting of lampblack + clay, and are less abrasive than charcoal while still providing a very full black.

Pencil crayons are available in a wide range of colors and tend to have a waxy core. Can be difficult to erase with an eraser, since they tend to smudge.

Grease pencils are typically encased in paper, but wood-encased grease pencils also exist. Grease pencils are a popular choice for writing on other surfaces than writing paper, such as plastic, metal, glass, and photographs. Markings made on a hard, glossy non-porous surface can be removed by rubbing with a paper towel.

Why is it called a pencil?

The word pencil is derived from the Latin word penicillus, which means little tail. Penicillus originally referred to a fine brush made from hair; a type of brush used both for painting and writing.

I like to suck/chew on my pencils. Will that give me lead poisoning?

Not as long as you stick to normal modern pencils because there is no led in those.

Lead was used for writing in antiquity before the risks associated with lead exposure was known. In some languages, this still lives on in the word used for pencil, e.g. bleistift (“led pin”) in German.

Also, it was not uncommon for the casing of pencils to contain lead as late as the mid-1900s. This meant that you could actually get lead poisoning from biting and sucking on the pencil, even though the core contained no lead. More specifically, it was the paint used to coat the casing that contained lead.