A sticky note is a small piece of paper with a re-adherable strip of glue on its back. The sticky note can be attached to a flat surface, such as a whiteboard or a paper document, and then removed again without leaving any marks on the surface.

The adhesive on a sticky note is low-tack and pressure sensitive, allowing the sticky note to be easily attached, removed and re-attached.

Originally, sticky notes – produced under the brand name Post-it Notes – were only available as small yellow-colored squares. Today, sticky notes are produced by many different manufacturers and come in a wide range of size, shapes, and colors.

If standard sticky notes aren’t enough for your needs, extra sticky, sticky notes are available from some manufacturers. One of them is 3M, which launched their Post-it Brand Super Sticky Notes in 2003. These notes come with a more adhesive glue that sticks better to vertical surfaces and non-smooth surfaces than standard Post-its. In 2018, 3M began selling Post-It Extreme Notes, which are more durable and water-resistant, as well as capable of sticking to surfaces that standard sticky notes have a hard time attaching to. The Post-It Extreme Note were intended for environments such as construction sites and manufacturing plants, but has become popular in schools as well. Among other things, they can be very useful for arts and crafts projects in schools. 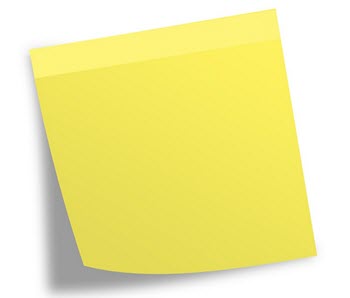 The sticky note was invented by mistake. In 1968, Dr. Spencer Silver was working for the 3M company in the U.S, trying to develop a super-strong adhesive. Instead, he created the opposite – a very weak adhesive. He realized that his low-tack reusable pressure-sensitive adhesive could be usedful, but it took several years for him to convince 3M to put it into production.

In 1974, one of Silver’s colleages, Art Fry, realized that the adhesive could be used to anchor his bookmark in his hymn book, and began developing a product. When looking for paper in the lab next door, he only found yellow scrap paper – and that’s why the first sticky notes from 3M were yellow.

3M launched the product as a bookmark under the brand name Press ‘n Peel in 1977, but it did not sell well.

A year later, consumers in Boise, Idaho were given free samples of the Press ‘n Peel. Out of the surveyed recipients, 94% answered that they would buy the product. This encouraged 3M to relaunch the sticky note, this time under the brand name Post-Its.

The Post-Its were launched in 1979, and by April the following they were available in stores across the United States. This time, they sold much better, and in 1981 the product was launched in Canada and Europe.

In 1997, the inventor Alan Amron sued 3M in the United States, claiming to be the real inventor of the sticky note. The case was settled out of court in 1998, with 3M paying Amron an undisclosed settlement amount. In 2016, Amron launched a new suit against 3M, asking for $400 million in damages. The suit was subsequently dismissed, with the court declaring that the 1998 settlement agreement should be upheld.